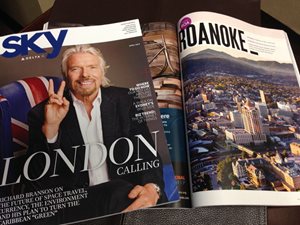 If you fly Delta Airlines this April, you may find some familiar faces in the seatback pocket. Delta’s in-flight entertainment magazine Sky profiled the Roanoke Region for the upcoming issue, which features Richard Branson on the cover.

Split into three parts over 30 pages, the profile features the best the Roanoke Region and the New River Valley have to offer in the realms of business and tourism. Beautiful photos of the area are spread throughout, interspersed with “My Roanoke” sidebars featuring quotes from locals such as Carilion Clinic CEO Nancy Agee, Roanoke Mayor David Bowers, musician Nicole Yun, and Robert Kulp and Mike Whiteside of Black Dog Salvage.