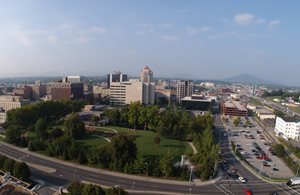 Numbers released by the Council for Community and Economic Research for the first quarter of 2014 rank the Roanoke metro area as having the lowest cost of living index in the state. With and index of 91.6, costs in Roanoke are 8.4 percent lower than the national average of 100. Roanoke is the 68th lowest cost metro market in the country, and is in the top 25 percent of metros nationally.

The numbers put Roanoke well below the national average for costs and ahead of similarly sized metro markets in the South such as Richmond (100.6), Asheville (105.7), and Chattanooga (94). New York City ranked highest in cost of living with an index more than twice the national average (220.3), followed by Honolulu, HI in second (175.1).

The Cost of Living Index measures regional differences in the cost of consumer goods and services, excluding taxes and non-consumer expenditures, for professional and managerial households in the top income quintile. It is based on more than 90,000 prices covering 60 different items for which prices are collected quarterly by chambers of commerce, economic development organizations, and university applied economic centers in each participating urban area. Small differences should not be interpreted as showing a measurable difference.

Use our cost of living calculator to see how far your dollar will go in the Roanoke Region.