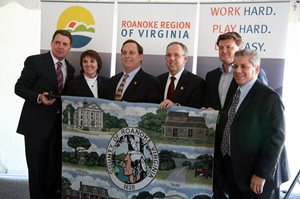 Ardagh’s remodeled, 525,000 square-foot building will be capable of producing 1.7 billion cans a year. This is the first time this new generation, thin-walled metal can will be produced in North America, following its successful launch by Ardagh in Europe.

The Roanoke Regional Partnership worked with Roanoke County and the Virginia Economic Development Partnership to secure the project in August, 2013. Ardagh’s move to the Roanoke Region also prompted Netherlands-based Canline Systems to open its first U.S. facility in Roanoke County. The international supplier of conveyor systems moved to the region to be closer to customers, including Ardagh.

Read the full press release from Roanoke County on the ribbon cutting below:

A new manufacturing plant officially opened November 3 at a ribbon-cutting event with local dignitaries and officials from both ConAgra Foods and Ardagh Group. The Ardagh Group manufacturing facility will offer 100 new jobs to the local economy, and is the largest single manufacturing investment in Roanoke County’s history.

Ardagh invested more than $93.5 million in the state-of-the-art facility to manufacture light weight metal cans and traditional 3-piece food cans on six high-speed production lines. This is the first time this new generation, thin-walled metal can will be produced in North America, following its successful launch by Ardagh in Europe.

Ardagh is pleased to announce that it is also a platinum sponsor of Canstruction Southwest Virginia which takes place at the Taubman Museum of Art in Roanoke between November 7 through November 22, 2014. This special event which supports the local design industry and collects food for hunger relief projects will feature an Ardagh logo constructed entirely of cans that will be given to food banks after the event.

“We are very pleased to be locating in Roanoke and look forward to a long and mutually beneficial association with Southwest Virginia. We chose this area against several other options for many positive reasons including a well-developed infrastructure, proximity to our major customer, the availability of skilled labor and a favorable business tax structure.”