Join ‘The Dive Whisperer’ to Talk Beer and Food on Twitter 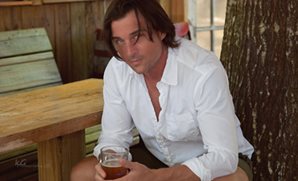 Welcome Jason Horn, a.k.a. The Dive Whisperer, to Get2KnowNoke this week. Jason is a bit of a world-traveler who was born in Roanoke, left for a while, and has returned home with a “hope to encourage the continued growth of this community’s beer, food, and culture scene.”

This week, Jason has promised to tweet about beer, bacon, food, culture, travel … and more beer.

From his personal account, @thedivewhisperer, Jason loves to talk about these very things and is a contributor to The Daily Meal. He’s shared more than 20,000 thoughts 140 characters at a time since 2013. Here’s his bio: Release The Krakken! And then let’s BBQ it. Korean Style. Dances at the Bada Bing. Who brought the beer? More at http://goo.gl/uo1g7I

Here are a couple more facts about Jason, who share quite a bit of humor on social media as well.

If you are on Twitter, give @thedivewhisperer a follow and make sure to join the conversation with him this week @get2knownoke.

Do you have what it takes to tweet for us? Apply today.