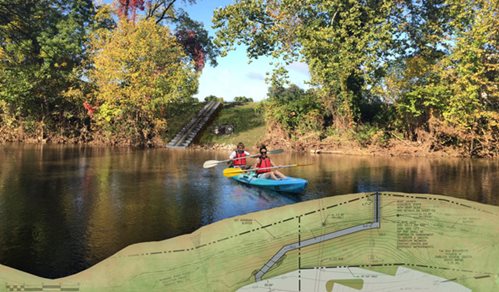 ROANOKE, Va. (December 14, 2015) – Another asset in the Roanoke Region’s growing number of outdoor amenities – a new kayak launch close to downtown – is a step closer to reality with $67,000 in cash and in-kind donations.

The launch, to be built off South Jefferson Street  near the intersection with Reserve Avenue, next to The Bridges development, will be a convenient way to access the Roanoke River, halfway between Wasena Park and Piedmont Park.

At a news conference this morning at the site, supporters encouraged the community to raise the additional $10,000 needed before construction can begin.

“Through in-kind donations and corporate sponsorships we are 85 percent of the way to building the first public boat launch built with private money – no tax dollars,” said Pete Eshelman, director of outdoor branding for the Roanoke Regional Partnership and the Roanoke Outside Foundation. “The support we’ve seen demonstrates the desire to make Roanoke the best outdoor town on the East Coast.”
The put-in will make it easier to launch a kayak, canoe or inner tubes closer to the region’s urban core along the Roanoke River Blueway, a water trail that runs from the South Fork of the Roanoke River at East Montgomery County Park to Hardy Road in Bedford County at Smith Mountain Lake. The blueway also includes sections of the South Fork Roanoke River, Tinker Creek, and Back Creek.

“Adding a kayak launch to The Bridges is consistent with our vision to create a new destination to live, work and play,” said Aaron Ewert, project manager for The Bridges. “A kayak launch in the middle of an urban core is not just a great amenity to support our growing outdoor culture – it’s what young professionals, entrepreneurs and businesses are looking for when choosing places to live and invest.”

The launch is made possible by several corporate donors pledging money and in-kind services. They include UBS, Carilion Clinic (the property), Boxley Materials (concrete for construction), E.C. Pace (excavation and grading) and MB Contractors (construction). Once built, the facility will be managed by the City of Roanoke.

“With some of our area’s leading companies stepping up, everyone has the opportunity to bring us to the finish,” Eshelman said. “We challenge our community to raise the additional funds needed to create a new dimension in our ongoing strategy to focus on our outdoor assets to attract those who value easy access to the outdoors.”

It’s easy to make a donation through the Roanoke Outside Foundation. “Every dollar counts, and it’s 100 percent tax-deductible,” Eshelman said. “Any amount will go directly to create this community asset.”

Online and mail-in donations are accepted.

The kayak launch adds another element to The Bridges, which now includes Starbuck’s, the 157-unit South16 apartments, Dr Pepper Park at the Bridges and Moe’s Southwest Grill now under construction.