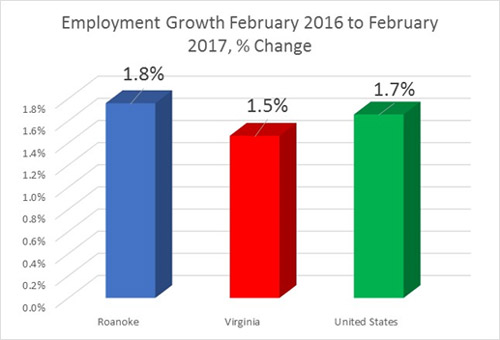 The Roanoke Region of Virginia continues to see strong job creation activity in early 2017. The Roanoke metro saw employment growth of 2,800 workers from February 2016 to February 2017 and total employment is now at the highest level of any February on record according to data from the Bureau of Labor Statistics.

Employment increased by 1.76 percent from February 2016 to February 2017 in the Roanoke MSA, which surpasses the national rate of growth over the same period (1.66 percent).

Employment gains were mainly in education, health services, and professional and business services.

The region is poised for continued growth heading into the rest of 2017. More than 1,400 jobs were announced in 2016 from projects including Deschutes Brewery, Eldor Corporation, Virginia Community College System, Virginia Tech Carilion Research Institute, and Ballast Point Brewing, among others.