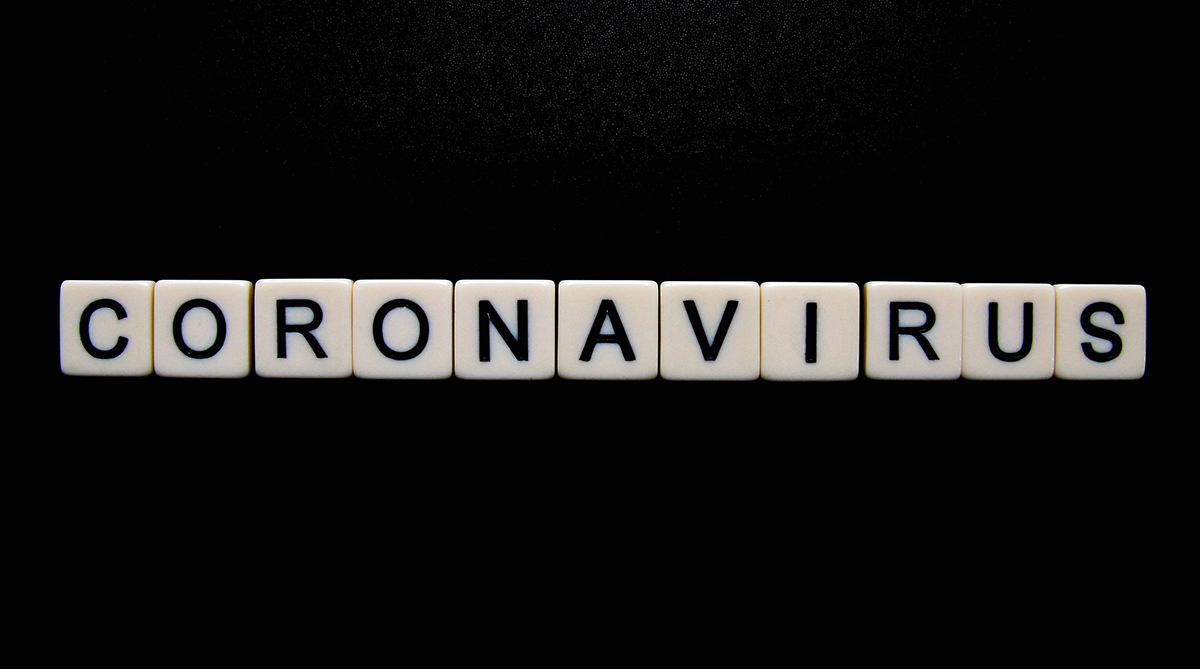 The COVID-19 pandemic has significantly impacted employment and the Roanoke Region’s overall economy. John Hull, director of market intelligence has put together this analysis of the regional economy – where we came from, where we are now, and what’s ahead.

In 2019, the Roanoke Region celebrated its highest level of December employment since before the Great Recession. Recovery was long and slow with a few setbacks along the way including the loss of the Norfolk Southern coal marketing division and shifting of the Advance Auto headquarters to Raleigh. 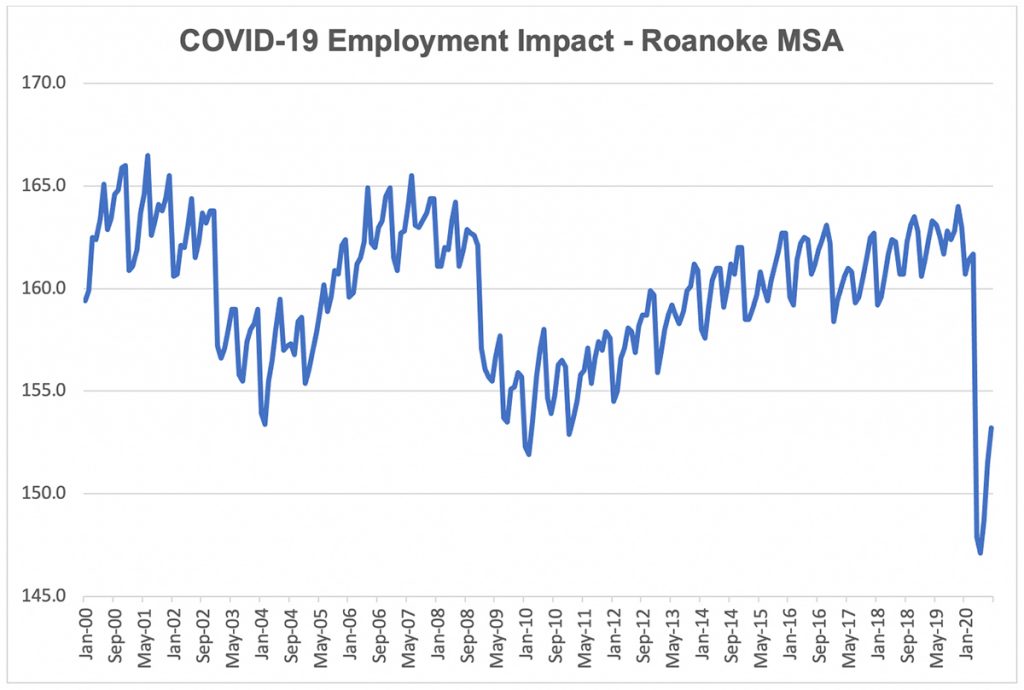 The economic shutdown surrounding the COVID-19 pandemic in the spring of 2020 resulted in the number of job losses, significantly higher than during the Great Recession. From March to April of 2020, the region lost approximately 14,000 jobs. Unemployment increased from 3.4 percent in March to approximately 10.5 percent in April.

While these losses were historically significant, there is reason to be thankful in that the losses were well below losses projected by the Virginia Economic Development Partnership and others who had projected 20,000 or more losses regionally.

The region has begun the process of recovery. As of August, the region has regained 5,300 of the 14,000 jobs lost in April. Recovery has begun in several sectors including leisure/hospitality, retail trade, and manufacturing.

Unemployment for the Roanoke Region is 6 percent as of August, down significantly from April. The Brookings Institute has noted that a significant proportion of the jobs lost during the COVID pandemic may not return. Workers in industries hardest hit will need to retrain to fill positions in growing industries that often require stronger STEM education.

While regional employment data shows a brisk recovery, the real-time labor market data reveal there is some cause for concern heading into the fourth quarter. Data from Chmura Analytics show job postings saw a remarkable recovery in the third quarter although hiring appears to have slowed in September.

The slowdown coincides with an apparent increase in initial jobless claims and points toward a delay in the employment recovery into the fourth quarter. As of October 3, initial jobless claims in the Roanoke Region were at the highest level since the week of August 22 and up roughly 46 percent from the previous week.

Hiring demand is strongest in healthcare practitioner occupations in which employment ads have grown 4.5 percent over the last year. Healthcare support positions also are strong with only a modest decline in demand. Hiring demand appears weak in personal care and service occupations (fitness trainers, hairstylists, recreational workers, and childcare workers), office and administrative support, and building/grounds maintenance (maids/housekeeping). Office and administrative support is likely experiencing disruption resulting from the prolonged work from home trend and uncertainty regarding the timeline for a full return to offices. Lower demand for building grounds and maintenance occupations reflect disruption largely in the lodging industry.  The higher risk profile of the personal care industry has suppressed demand.

Consumer spending has shown a remarkable recovery though there remains much ground to be regained in the latest numbers available from TracktheRecovery.org, a project of the Bill and Melinda Gates Foundation, Harvard University, and Brown University.

* Data is not available for all localities in the Roanoke Region

Recovery in consumer spending is uneven across the Commonwealth according to TracktheRecovery.org. Multiple factors are likely impacting consumer spending recovery including the employment mix of residents within various localities (COVID impacting retail and restaurant employment more significantly than other sectors) and an increased tendency to forego in-person retail for online. 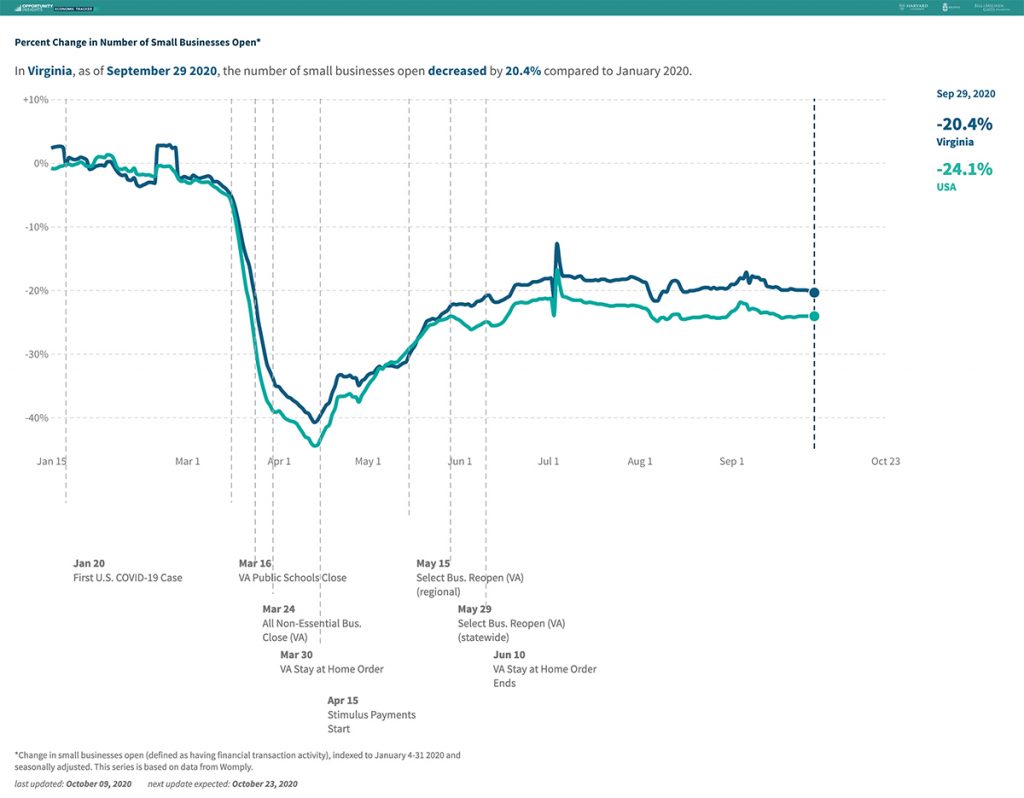 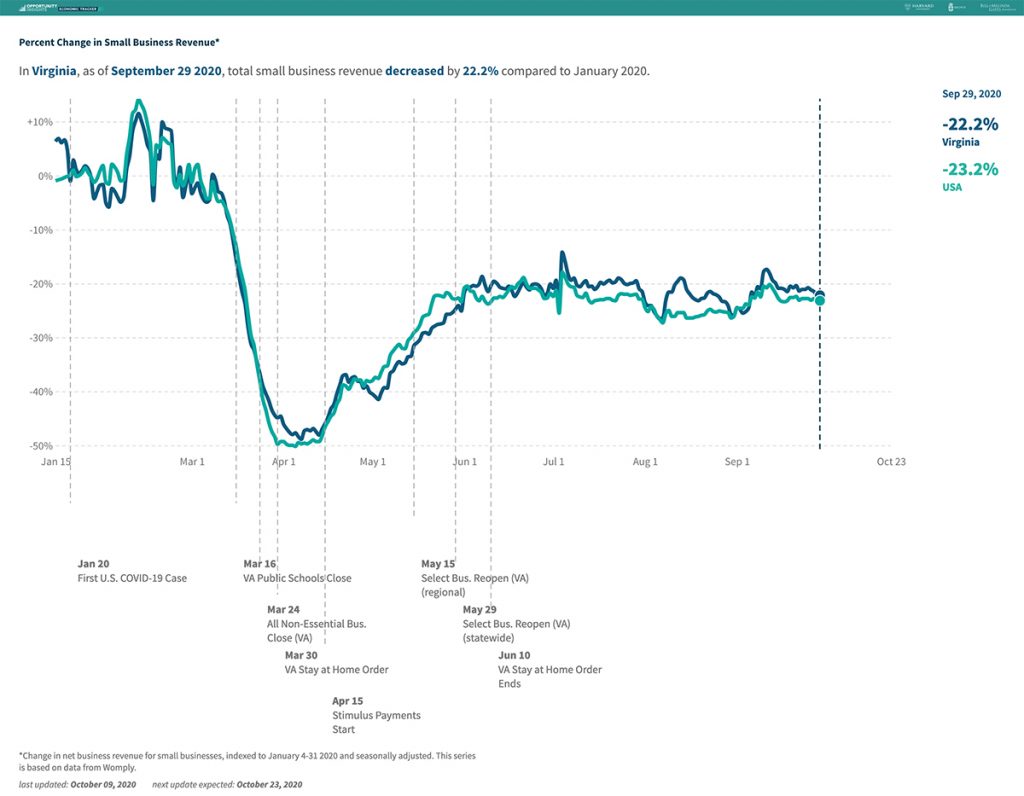 Uncertainty reigns regarding the path of the pandemic, but most agree the recovery will continue. The question is: how long will it take to fully recover? The October 2020 National Association for Business Economists (NABE) survey (a survey of a panel of 52 professional forecasters presenting a consensus forecast) reveals a lowered composite forecast for growth in the remainder of 2020 and for 2021. Third quarter is expected to come in at a roughly 25 percent annualized rate of growth nationally, which will erase much of the second quarter annualized loss in GDP of 31 percent. Targeted growth for the fourth quarter was lowered from 6.8 percent to 4.9 percent. And 2021 is expected to see real GDP grow by only 3.6 percent, down from 4.8 percent in the June survey.

There is concern about whether a second federal stimulus will emerge and if a second wave of infection leads to stringent restrictions. A third of the NABE forecast panel believes the nation will achieve full GDP recovery in the second half of 2021, another third believes full GDP recovery won’t occur until the second half of 2022, and the final third believes recovery will wait until the end of 2022. The NABE panel of economic forecasters 10 to 20 percent of jobs lost during the pandemic may never return. Employment recovery will lag GDP recovery nationally with the jobs and skills mismatch that will result from jobs permanently destroyed by the pandemic.

There is much uncertainty among forecasters, and CEO confidence surveys reveal similar precariousness. The third quarter Conference Board Measure of CEO Confidence moved up one point from 44 in the second quarter to 45 in the third quarter (readings below 50 reflect more negative than positive responses). Tellingly, more than 38 percent of surveyed CEOs expect to reduce workforce over the next 12 months, and 37 percent will trim their capital spending budgets by 10 percent or more.

While most forecasters are not suggesting a double-dip recession is in the future, there is a definite risk of a slowing recovery which may lead to significant long-term unemployment.

*Represent projections from the NABE. Other data sourced from the Bureau of Economic Analysis