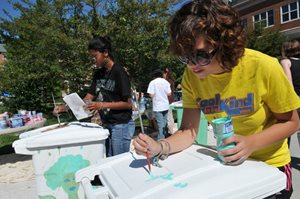 If you fly Delta Airlines this April, you may find some familiar faces in the seat back pocket. Delta’s in-flight entertainment magazine Sky profiled the Roanoke Region for the upcoming issue, which features Richard Branson on the cover.

Split into three parts over 30 pages, the profile features the best the Roanoke Region and the New River Valley have to offer in the realms of business and tourism. Beautiful photos of the area are spread throughout, interspersed with “My Roanoke” sidebars featuring quotes from locals such as Carilion Clinic CEO Nancy Agee, Roanoke Mayor David Bowers, musician Nicole Yun, and Robert Kulp and Mike Whiteside of Black Dog Salvage .

The Virginia Tech Carilion Research Institute was recently recognized by the Dana Foundation for its work on public outreach during Brain Awareness Week (BAW). The executive director of the VTCRI, Michael Friedlander, Ph.D., was interviewed for the Alliance’s blog, specifically focused on last year’s successful events put on by the VTCRI during BAW.

Dana was especially impressed with the children’s outreach programs including the “Mythbusters: The Truth About Your Brain” event for middle and high school students in partnership with the Science Museum of Western Virginia, and the creativity around “Food for Thought: Chefs Celebrate Brain Awareness Week,” which challenged local restaurants to create dishes using brain-healthy ingredients.

The Dana Foundation sponsors public brain awareness activities in cities around the globe and is one of the main organizations supporting brain research through grants, publications, and educational programs.

Brain Awareness Week is March 10-16, but the VTCRI will be holding events and programs through March 27.