The cost of living was actually lower in the Roanoke Region in 2013 compared to 2012 in figures issued by the Council for Community and Economic Research.  The 2013 annual Cost of Living Index (COLI) shows that Roanoke has overall costs 8.9 percent lower than the national average and lower than more than 74 percent of metro regions across the nation.  The 2013 index is 91.1 compared to 91.4 in 2012.

The region’s cost of living is lower than many southern competing metro areas including Asheville, NC, Greenville, SC, Charlotte, NC, and Chattanooga TN.  The competitive advantages are mainly in lower housing and food costs. Transportation costs are also considerably lower than the national average. 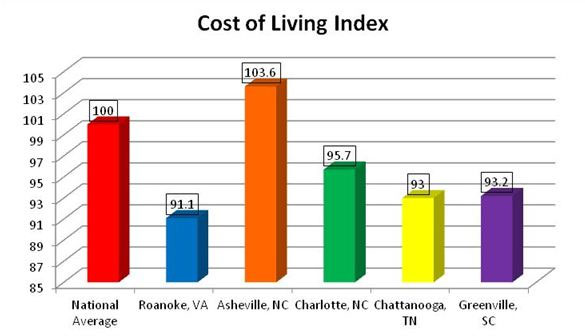 Carilion Roanoke Memorial Hospital Named One of the Most Beautiful Hospitals

From Chesapeake Bay and the Hampton Roads on its eastern coast to the Shenandoah Valley, the Blue Ridge Mountains, and the Heart of Appalachia on its westernmost reaches, Virginia measures more than 42,700 square miles in size. Crisscrossing the Old Dominion are 58,000 miles of interstate highways, local connector, and county roads, as well as some 17,000 miles of urban streets and local roads. Driving here is a both a way of life and a means of transportation, as the state’s 5.7 million licensed drivers know.

ValuePenguin.com analyzed sample car insurance premiums in the state to give consumers an idea of the best auto insurance rates in Virginia. We studied car insurance rates by company, city, and profile, and found the overall average to be $2,737 for a standard liability protection. While this was the mean blended premium, we found that rates could vary quite widely. In fact, for the same driver profile, we saw the difference between the minimum and maximum car insurance costs to be as much as 7x. We’ve compiled tables below to rank cities and insurers in the state by premiums to guide Virginia residents in their search for the best car insurance rates.
The areas sampled in the study represent a blend of the state capital, large cities, and smaller rural areas. In general, across cities, there was not much variation in the cost of insurance across the 25 underwriters and three driver profiles in the study. Roanoke, with a population of 97,000 was the cheapest place to insure a car at $2,364 a year. Alexandria, the most expensive city in the sample, was 23% more expensive.

5 Things I Love About Roanoke

Ardagh Group, a Luxembourg-based global leader in metal and glass packaging for the food and beverage industry, will locate a state-of-the-art metal can manufacturing facility in the 525,000 square foot former Hanover Direct distribution center on Hollins Road.

The company will create 96 new jobs and invest $93.5 million in real estate and equipment. It is the largest single manufacturing investment in Roanoke County history.

Canline Systems, an international supplier of conveyor systems for the packaging industry, will open its first U.S. facility in Roanoke County, creating 25 new jobs over the next three years. The company is expanding to the U.S. to be closer to customers including Ardagh.

The company will design, manufacture and assemble the systems at its 10,500 square foot facility at 6525 Commonwealth Drive in Southwest Roanoke County. The company will also serve other customers throughout the United States from this facility.

Carilion Roanoke Memorial Hospital was recognized for having a higher rate of patient satisfaction than the U.S. and Virginia averages. The ranking cites the hospital for high performance in gastroenterology, geriatrics, gynecology, nephrology, neurology, and urology.